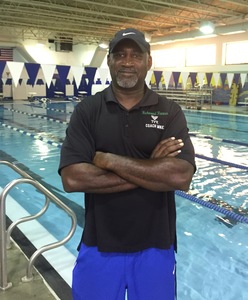 Coach Mike has been with the Racers since its inception in 1992, and he has been the head coach since 1997.  Mike retired from Richmond Parks and Rec. in 2015 with 25 years of service.  He has coached all levels on the Richmond Racers swim team. This year, his primarily responsible will be managing the silver and red levels, but he will float around to different levels from time to time. Mike has been employed with Richmond Public Schools Special Education department for over 35 years. He and his wife have been married 25+ years, and they have 5 children (3 sons and 2 daughters).

Coach Chris was born and raised in Charlottesville, VA where he swam and coached for the City Swordfish for 14 years. He went to VCU where he earned his MT in Early and Elementary Education in 2016. Chris is a Kindergarten teacher at Harvie Elementary. He has coached with Richmond Racers since 2017, and is also the head coach of the Anirav swim team (JRAC) during the summer. Coach Chris works primarily with the younger practice groups, Green through Silver.  In his free time, Chris enjoys the outdoors- running, biking, and spending time along the James River with his dog Peaches.

Coach Wells is our senior level coach. He is a product of Richmond Racers; he partook in the Richmond City learn-to-swim program at five years old, then joined the Richmond Racers Swim team to swim until he was 19 years old. He also swam at Southampton Recreation Association for 14 years, and was a member of the James Madison University Club Swim Team for four years. His coaching credits include: one year at Willow Oaks Country Club; four years at Southampton Recreation Association; three years as an executive board member on the JMU Club Swim team; and the Trinity Episcopal High School Assistant Swim Coach since 2017. Wells returned to the Racers in 2018 as a Assistant Coach. Wells is also a teacher at St. Michael's Episcopal School. His love and pride in the team is shown through his coaching of the Red, AG Gold, Junior, and Senior groups. 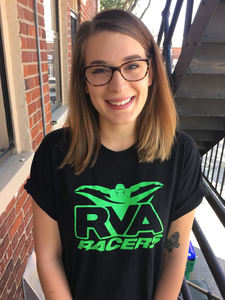 Coach Mikaela has more than 13 years experience in USA swimming. She joined Richmond Racers in 2018 and primarily works with the Blue, Green, and Silver swimmers. She grew up swimming in Portsmouth, Virginia and is excited to be planting new swimming roots in the Richmond area. Outside of swimming, Mikaela earned her Masters in Teaching degree from VCU in 2019, and is a 1st grade teacher at Linwood Holton Elementary. 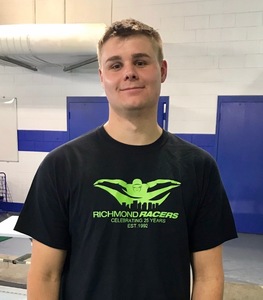 Coach Nick swam competitively for 15 years. Additionally, he swam summer league for the Granite Marlins when he was 4 years old until he graduated as a Senior. Furthermore, Nick has an extensive club swimming background from his time with the Richmond Racers, as well as Poseidon Swimming. As a college student-athlete, Nick attended The Catholic University of America where he majored in Civil Engineering. During his time at CUA, Nick was a four-year swimmer who was a Landmark Conference All-Conference First-Team Selection in numerous events, Conference Champion, and school record holder in multiple events. Nick's coaching credits include coaching the Granite Marlins in RMAL for 2 years, SwimRVA's development swim program, and the RVA Racers. Nick's intensity and love for swimming can be seen through his involvement with the development of the Racer's AG Gold, Junior, and Senior swimmers. Outside of his involvement with Racers, Nick works for Hourigan as a Project Engineer serving multiple areas of the construction process including Virtual Construction as well as Field Coordination of a project. In his free time, Nick is an avid VCU Basketball fan and likes to remain active by swimming, road biking, and playing a lot of basketball.

"A Swim Team for Everyone"

RVA Racers is the most affordable, year-round swim team experience in Richmond. Competitive, supportive, and FUN!!

Please email us if you have questions or would like additional information about RVA Racers.